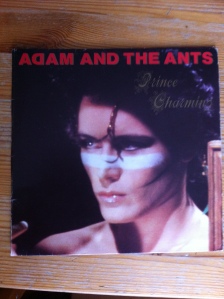 This was Adam – to steal a phrase from Neil Tennant of the Pet Shop Boys – in his imperial phase. He could do no wrong.

Prince Charming came hot off the heels of the mega-hit Stand and Deliver, which had crushed all before it by entering the chart at no.1 in May 1981 and staying for 5 weeks.

But Prince Charming turned things up to 11.

Gatefold sleeve! For a single!

How could he fail?

He didn’t. Prince Charming strode straight into the UK singles chart at number two, knocking aside the year’s best selling single Tainted Love the following week and staying at the top for a month before being replaced by Dave Stewart and Barbara Gaskin’s cover of Lesley Gore’s sixties hit “It’s My Party“.

Adam also thought it high time to update his dressing up box. Just as we had got used to his new image as a dandy highway man, out comes a full regency costume (with the tradmark nose stripe now moved to a three colour affair on his right cheek) for his cinderella role in the video.

But there was more. The final minute of the video also saw him dressed as such misunderstood individuals as Clint Eastwood, Alice Cooper and TE Lawrence before closing with him back in his dandy highwayman garb.

Prince Charming, it’s fair to say, is not Adam’s strongest single. It was very much a “never mind the quality, feel the width” affair, released at the height of his fame when anything with his name would be picked up. To capitalise on his success, in 1981 there was a slew of re-released material from Adam’s earlier Dirk era. Xerox and Car Trouble both nudged the bottom end of the chart having failed on their original release while Kings of the Wild Frontier, stuttering to number 48 first time round in July 1980, ended up a no.2 6 months later.

While Adam’s songwriting partnership with Marco Pirroni was clearly paying dividends they were probably feeling the pressure of a punishing release schedule and Prince Charming subsequently seems very slight. Gone were many of the tribal drums, chanting, sticks and build to a catchy looping choruses (AntMusic, Dog Eat Dog, Magnificent Five). Leftover was a chorus looking for a couple of verses. It feels rushed. It probably was rushed. A “will this do?” song. Something to keep the momentum going and satisfy the record label.

After the excitement of Stand and Deliver, expectations were high for the be-striped one. To an uncritical eleven year old boy those were met. But thirty years later (hell, even a year later) the appeal of Prince Charming, unlike releases before (and subsequently) wore thin. It’s the only era of Adam’s I never revisit.

Adam might have expanded his dressing up box but Prince Charming was definitely the Emperor’s new clothes.