This particular record by Leeds band Cud has not quite reached the loft but my rules for writing this blog are getting looser with time and frankly, if I don’t write about Cud soon I might just burst. So acquiring their recent double a-side Louise/Mexico (signed!) at a recent gig is all the excuse I need.

Cud were a massive band to me in my early 20s. I was a student in West Yorkshire in the late ’80s /early ’90s, living in a grubby shared house, each room strewn with old copies of the NME and Melody Maker. While we were friends with the usual student-y common interests, at that tender age much of our identity was defined by the bands we listened to. Or perhaps pretended to. But with Cud no pretence was needed…

My first exposure was a shaky C90 copy of their debut “concept” album When in Rome, Kill Me. In an era where fashion dictated the baggier the better, the city du jour was Madchester and the “Beat” had to be “Big”, Cud was something different. Carl’s quasi-operatic tones were a refreshing change to the lazy drawl of so many of his peers (yes, you Ian Brown, Shaun Ryder, et al). The machine-like precision of Steve’s drumming (drums he found in a skip as Cud lore would have it) didn’t automatically turn you into Bez the moment you heard them at the indie disco. The pseud-ish lyrics (“The stoic frowns. And knits his brow. The censor wants to stop us. The critic hates my guileless prose. My simple modern opus” ) were hardly the thing of lads anthems. The song titles (Only a Prawn in Whitby, Bibi Couldn’t See, Wobbly Jelly) were, well…. The shirts! John Peel’s blessing. My God, what wasn’t to love? And they were from Leeds! They were OURS!

I spent the summer of 1990 wearing out my taped copy of When in Rome….

Wind forward a few months. An album of session tracks and rarities had kept me sated (Elvis Belt, including the best versions of Lola and Urban Spaceman you will ever hear). But I wanted new stuff. With XTC’s Dave Gregory producing, their second LP proper finally emerged. Gleaming like a diamond and competing for the discerning indie kid’s affection with releases from The Charlatans, Ride and The Shamen, Leggy Mambo showed a musical maturity that had lost none of the playfulness of their earlier output.

uitar hook. Yet! Yet! It was seriously overshadowed by the sheer urgency of the opening three tracks (Now, Heart, Hey Boots! – some genius sequencing here). It’s on Spotify. Just go and listen.

I finally saw Cud live on a brief supporting tour for the baggy-ballad Magic (Leggy Mambo‘s second single) at Leeds Warehouse on 14 March 1991. Apparently it was their 200th show. To this day I’ve never felt more energy at a gig. Cud were triumphant and like the rest of us, they were having fun! For so long, the indie world’s best kept secret, interest in the band was building and by all accounts major labels were in attendance. The next day A&M offer Cud a deal.

Moderate chart success followed for Cud but they weren’t a carbon copy baggy Madchester outfit that all the majors were clamouring after and A&M didn’t *really* know how to handle or market them. The A&R who signed them left the label soon afterwards and disagreements followed over their choice of producer.

The singles for the next album Asquarius were still strong, if a little more polished than before and each release had its own cut out gimmick (a house for Through The Roof, spectacles for the very fine Rich & Strange and errr… aubergines for the rerelease of Purple Love Ballon). I bought them all dear reader. 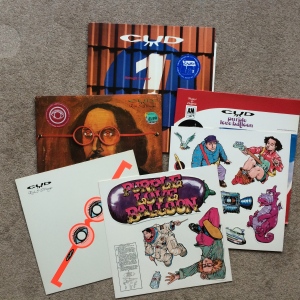 But while Cud had always defined their own version of cool their major label identity didn’t feel quite right. Almost like it was being forced upon them. It reminded me of ABC’s Zillionaire phase but without the irony. I began to lose interest. The rumblings of Britpop could be heard…

Another A&M album (the under-performing Showbiz) and in 1995 they were dropped. The band sort of split and it all went quiet. There were rumours of a third album recorded for A&M before the split (Donkey With a Fez On) while Carl kept himself busy with a solo project (“Carl“) that pulled in musicians from Embrace and Spacemen 3. He also appeared in Yorkshire-based soap opera (Emmerdale) and in an advert as a blue Smartie. I’ve searched in vain for that nugget on You Tube…

However in 2006 they resurfaced to release a best of album (Rich & Strange) and a mastered reissue of When in Rome (not a remaster, you see, as it was never mastered first time round), which was one in the eye for eBay chancers as original CDs of WIRKM had been routinely selling on eBay for £50.

A tour to support Rich & Strange duly followed (minus guitarist Mike). I went to see them of course, in Leeds, this time round at the Irish Centre along with other long term fans (the ageing Space Cudets), many increasing in girth with one eye on their watch (paying babysitters by the hour). Miles Hunt of the Wonderstuff supported them, acoustically, minus The Wonderstuff, on a stool.  He had the air of an indie Ralph McTell. At the time he had just written the theme tune to the BBC kids show Underground Ernie (voiced by footballing legend Gary Linker, fact fans) although I don’t recall him playing it. My kids were big fans so I was especially disappointed.

The gig, along with several bellies, bounced. All killer, no filler. Nice shirts too.

And for the last few years Cud have bobbled around, doing several “last ever” gigs, releasing CDs at gigs with no music on them and the odd limited edition single.

And then on 5th January 2014 Cud announced on my Facebook timeline they were playing a weekend residential at the Brudenell Social Club in Leeds in April. The Friday night would be When in Rome in sequence, on Saturday it would be Leggy Mambo. Nice. 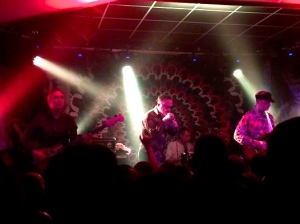 It was inevitably a sell out. I went. It was brilliant. Yet again, the Cud line-up was only three quarters there, this time missing drummer Steve. But never mind. Perhaps he’d gone to Leeds other, lesser gig that night – Elbow at the enormo-dome…?

Nothing had changed. The love and energy so prevalent in Leeds in 1991 was there again, probably along with most of the same people. The band were tight, Carl’s voice was as rich (and strange) as ever and the Space Cudet stage invasions were hilariously good natured. And I’m sure I recognised some of the Cudets from the school run.

I’d not been to an album show before so knowing the set list in advance was an interesting experience. Nevertheless on each night the second half was filled with b sides and early singles so the element of surprise was not all gone. But sadly, not for want of shouting for it, no Urban Spaceman.

I went to both nights with good friends from my University days and in between gigs, a little sore from our first mosh pit in 15 years, we couldn’t resist a tour of our old student stomping ground. We sauntered through a space-age university campus that we only half recognised; had a pint in one of the few local pubs still standing and, on reaching our student digs from 20 years previous, were invited in by the current, somewhat naive residents to take a tour of our old house…

Like Cud the night before, nothing had changed. Nothing. Same decor, same carpets (probably still un-hoovered), same landlord. He still had his ice cream van parked round the back. We used to get the odd ice lolly “on the house” for prompt rent payment. It’s not what you know…

And so after a glorious two-nighter in the suburbs of Leeds, Cud disappeared once again. Although to be fair most of the band were happy to hang about in the bar afterwards to chat to fans. But they will be back and anyone fancying some indie-nostalgia can catch them later this month at an all-dayer in Manchester along with the evergreen Wedding Present, fraggle-lite Ned’s Atomic Dustbin and much, much (as they say) more.

Here’s their great cover of The Kinks’ Lola from 1989. As much as I love the song, I chose this because some of the video was filmed in the (cobbled) streets where I used to live – Saltaire in West Yorkshire. Enjoy.

Still with me…? Try this from 25 years later. The magnificent Louise.