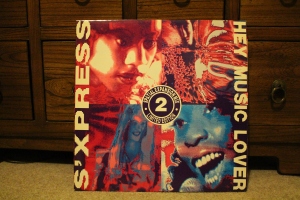 You know when you think you are the only one who knows or loves a particular record or band and then all of a sudden you find out someone else feels the same? And that’s sort of a good thing for a while until there’s someone else. And then another person. And another… And all of a sudden it’s not yours any more

Music is my life

Well that’s how I feel about Hey Music Lover. Except there’s a 23 year gap between buying this record and finding someone else who loved it as much as I do. And thanks to YouTube I now realise there are quite a few of us. But that’s not so bad really. It just proves I was right all along.

Hey Music Lover was S’Xpress’ third single, a very radio friendly follow up to Theme From… and Superfly Guy and continuing their nod to Sly and the Family Stone, which even in 1989 felt impossibly cool and retro.

While the first two singles are marvellous in their own right (and I’ll probably get to those at some point int he future) Hey Music Lover is just an out and out celebration. A record that makes you smile, that wills you onto the dance floor. But what really lifts it above the competition is William Orbit’s Spatial Expansion Mix.

Clocking in at a healthy eight and a half minutes by the end of it you’re breathless. The whole record sounds like it’s a race to the finish, dragging you along at breakneck speed, barely letting up until two thirds of the way when there is a brief pause until…. “Maximum Bass.”

Orbit knows his way round a dance remix (see my earlier post on his version of Kraftwerk’s Radioactivity). He resists the temptation to throw everything recognisable out and “make it his own” like Aphex Twin but he bends, twists, pulls and pushes all the elements into something new, full of surprises but still familiar.

Like the 303s that dominate this mix, I’m burbling. Listen to it. All the way through. As loud as you can. And read the You Tube comments. They probably say it better than I can.