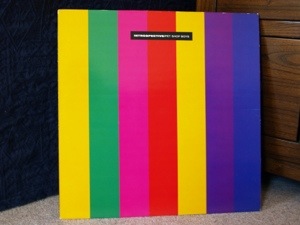 How can you not love an album with a cover as iconic as this? Introspective was the first Pet Shops Boys album (and 25 years later still one of the few) not to feature one of them in some shape or form on the cover, indicating that this was an altogether different proposition.

And it was. Consisting of only 6 tracks it initially feels more like an EP, although as each track weighs in at at least 6 minutes, there is still plenty to enjoy. At the time, Neil Tennant marked Introspective as the end of their “Imperial Phase”, expressing disappointment when Domino Dancing, released shortly before the album, only charted at number seven while it’s two predecessors had managed to get to number one. In hindsight, he shouldn’t have worried, apparently Introspective is their second biggest selling album to date.

END_OF_DOCUMENT_TOKEN_TO_BE_REPLACED

I’ll probably give record store day a miss this year. My dislike of queuing and sheer lack of independent record shops where I am this weekend makes it very hard for me to take part. Plus there’s not much I really want from the list (a Kate Bush 12″ and Wedding Present ep sung in German were the only things that interested me) and I go to record stores all the time anyway. I don’t need to be told by BBC 6Music to go. So I shouldn’t feel guilty.

END_OF_DOCUMENT_TOKEN_TO_BE_REPLACED

Head to Toe was released in June 1994 following the international success of The Breeders second album, Last Splash. As I recall it was a relatively rare release which only saw the light of day on 10″ in the UK and 7″ in the US (without the last track Safari).

No cd copy of this EP was issued although this will soon to be rectified when Last Splash gets the anniversary remaster treatment later this month in the form of LSXX. All the tracks from this and all the other Last Splash era releases are being bundled together on 3 CDs or (if you have more money than sense) a 7x vinyl boxset weighing in at an eye watering £75. You do get a booklet with that one too. Which is nice. Definitely worth it. Oh yes.

END_OF_DOCUMENT_TOKEN_TO_BE_REPLACED

Ask most people with a passing interest in pop music from the 1980’s to name two ABC albums and I doubt they would name Beauty Stab. Or in fact anything other than The Lexicon of Love.

I can understand that. LoL was a huge international success and (for me at least) the soundtrack of summer 1982. All subsequent ABC releases were overshadowed by LoL. Nothing stood a chance, really. Which is probably why I hold a torch for Beauty Stab.