Received wisdom was that The Queen is Dead is The Smith’s greatest album. It’s a great album. But not their greatest. That would be Strangeways Here We Come. It’s true. Morrissey and Marr agree with me. But I only have that on CD and cassette so it’s excluded (at least for now) from this blog.

Nevertheless, this is still an “all killer no filler” kind of record. I played this copy the other day when some friends visited, and provided a talking point while the kids ran about the rest of the house. It struck all of us that there just isn’t a duff track on here. Even the one person who didn’t really like The Smiths grudgingly agreed.

If I’m honest I prefer side 2. Just look at that track list – Bigmouth Strikes Again, The Boy With a Thorn in His Side, There is a Light…. While much is made of Morrissey’s lyrics, above all the appeal of The Smiths for me will always, always be the tunes. I know that this is hardly a grand claim, but those three songs pretty much sum up The Smiths for me. That and Girlfriend in a Coma but I can’t write about that yet (it’s in one of the boxes somewhere). It was The Boy With a Thorn… which actually switched me onto The Smiths, aged 15, hearing for the first time played on the school bus. I suddenly got it. After that Duran Duran were history…. 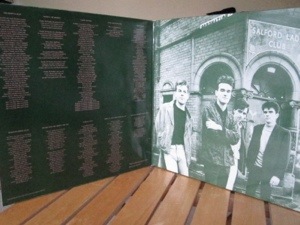 Curious to see what else was around at the time I did a bit of digging. Here’s the top ten album chart for 28th June 1986:

So, not many big hitters there…

I was a relative latecomer to The Smiths and never saw them live but I did manage to see Morrissey at Bradford St George’s Hall in 2002. He was without a record deal at the time and I remember the sublime First of the Gang to Die was a particular crowd favourite before it saw the light of day as a recording. But it was There is a Light… that still brought the house down 16 years later. That’s what we were all there for really.

Run out groove quotes: (1) Fear of Manchester. (2) Them Was Rotten Days.